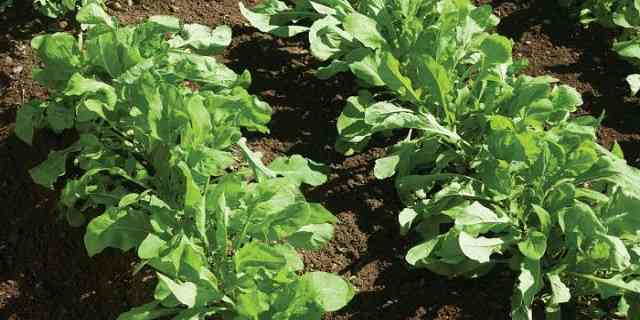 Arugula In General
Arugula is an edible annual plant native to the Mederiteanean region that is used as a leaf vegetable. Though it has been grown under cultivation since Roman times, Arugula cannot exactly be considered a domesticated crop as it has only been grown on a commercial scale since the 1990’s. Prior to that, it was typically harvested from wild plants.

In addition to the leaves, the blossoms, seed pods and also the mature seeds of the plant are also edible. Arugula has a rich, peppery taste and is extremely strong flavored for a leafy vegetable. It is particularly high in Potassium, Iron and Vitamin C, and therefore is an excellent source of winter vitamins. Though typically used raw in salads (usually to add flavor to other greens), it can also be cooked with pasta or meats to add a zesty flavor. In Southern Europe the leaves are also used on pizzas, in pestos and even in cheese.

Growing Arugula
Arugula seed is best sown directly into the garden or into the container where you intend to grow it to maturity, opposed to sowing the seeds into a flat and transplanting them later. As Arugula is very cold hardy, there is no need to sow the seeds under cover or inside of a greenhouse and it may be sown directly very early or late in the season. For the best results, the Arugula seed prefers a cool soil temperature of 40 to 55 degrees Fahrenheit and prefer a slightly shaded area in which to grow. For the best results, the soil should be fertile and loose, but Arugula will tolerate a wide range of soil conditions and will grow just about anywhere provided water is available. In addition, Arugula is very invasive and will easily self seed itself if allowed to set flowers and seedpods.

When planting the seeds in the open soil, sow the seeds one inch apart and in rows that are located 12 to 18 inches apart. Cover the seed with 1/8th of an inch of soil and apply water. The seeds should sprout in 3 to 10 days (longer in cooler than ideal temperatures). For a continuous crop, sow another row every two weeks and this will insure that new cuttings are available at regular intervals.

Once the seedlings are established and begin to crowd one another, thin the plants to four inches apart. (At this stage, you are encouraged to use the thinnings).

Arugula matures very quickly, typically within 40 days. Care should be taken not to allow the leaves to grow too large as they are suspectible to growing very bitter and will be tough. (Arugula also becomes bitter if grown in full sun, so this is definitely a crop for growing in places where many others will not grow). For the best results, select young, tender leaves.

How To Save Your Own Arugula Seeds
There are two basic methods to perpetuating Arugula year after year.

The first method is to allow them to self seed, which Arugula does easily. This can be accomplished by allowing the hardiest plants to bolt, set flowers and to simply leave them be. Eventually you will see the flowers begin to drop off, and seed pods begin to develop. (When young and tender, these pods are edible). Over time, the pods will swell with seed and then turn brown and dry. Once the pods become brittle, the seed inside the pods will scatter. Provided you leave the soil undisturbed, the next season you should have a large number of arugula seeds growing in the general vicinity.

The second method is to intervine in the above process about five to six weeks after the plants flower. At this stage, the pods should be brittle and should be carefully removed from the plant. Simply take the pods and crush them over a bowl. Six to eight seeds will be found in each pod.

From these, select the largest and best developed seeds and place them in a labeled airtight vial (best choice), envelope or plastic bag to keep for future use.

Opposed to discarding the second rate seeds, some seed savers will simply dump them and the debris from the pods back in the spot where they want to grow Arugula. Quite often, this debris will result in a few volunteer plants the next season.